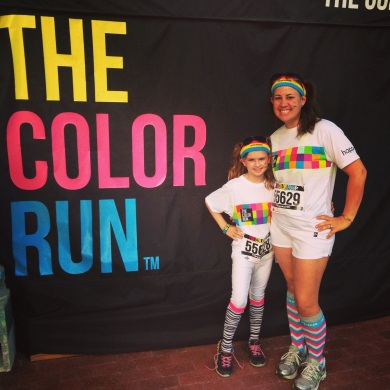 Last Saturday Emily and I had the most fun we’ve ever had together.  Well, except for the day she was born, which was really only fun in the sense that she was finally done being trapped in my uterus and I was finally done having a person trapped in my uterus. Obviously, that was fun only in the most sarcastic way possible.  It took us nearly 8 years to have another mega-memorable event together, and The Color Run – “The Happiest 5K on the Planet” – was the thing that did it.  *Warning: lots of happy = lots of pictures. 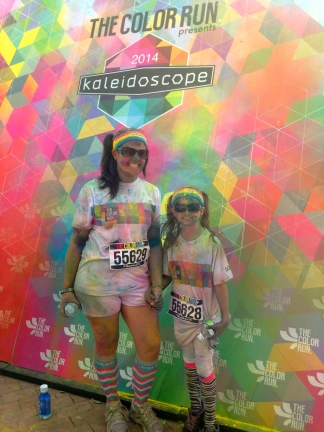 Emily loves that I run, and she’d been hinting for a while at joining me for a 5K. Originally, I’d wanted to take her to do a Disney 5K, but the cost and timing just haven’t worked out yet.  I thought she might like to do a mud run with me, and when I asked her her response was something like, “Ew! No!  I don’t want to get all muddy and gross!  But I would do The Color Run with you!”  Gotta love kid logic. 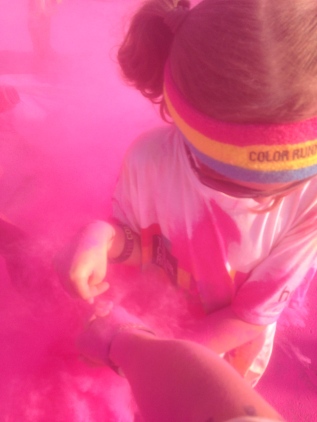 We signed up with a few other people right after the New Year so that we could get a group discount, and anxiously waited as the months ticked by.  As soon as I got the email telling us that the race was just days away and instructing us where we could pick up our race day packets, we started getting excited.  We bought our all-white clothing and made plans for me to pick her up from school early so she could go with me to pick up our materials. 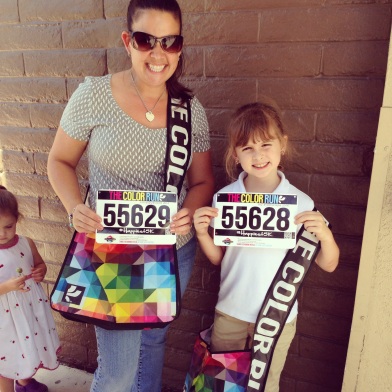 Our packets were available the day before the race at a local Sports Authority store, and although we waited about 20 minutes the process was smooth.  After showing my ID we each received our bib (she was psyched!), which we then showed to receive our Color Run bag, filled with other race day goodies like tattoos, a bracelet, a headband, and our T-shirt.  We had planned to purchase matching Color Run knee-high socks, but they only came in adult sizes.  So I let Emily pick out a pair for me (cute aqua, pink, and white chevron patterned), and we picked up a cool pair of zebra-striped knee-highs for her at Target. 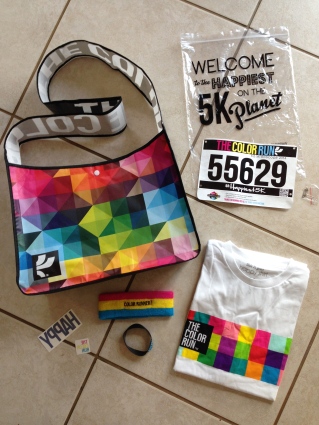 We plotted out our Color Run look, and decided we both loved the Color Run T-shirts they gave us so much that we’d rather wear those than the plain white shirts we’d already bought.  We also prepped the night before, putting our hair in pigtails and placing our tattoos on our cheeks and arms… anything to save time in the morning! 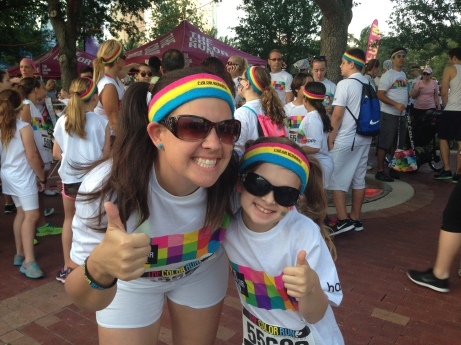 When we woke up we dressed quickly and quietly so we wouldn’t wake Julia and Jay, then snuck out of the house.  We parked, put on our bibs, and headed over to the park where the race would begin.  Despite the giant crowd of participants, we immediately ran into my best friend (and fellow Disney 5K runner) Sanne, her hubby, and 2 of her 3 boys.  Emily and I then headed off to meet up with a few of the other ladies who signed up with us from our church, and we hung out with them until it started. 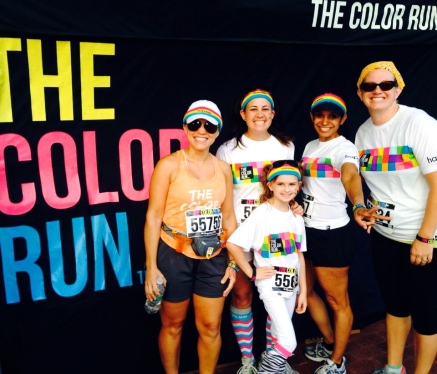 Once the race began, Emily and I started out running slowly.  It was, as usual, hard to really get going since there were so many people packed together and I refused to let go of Emily’s hand in such a large crowd… especially one where everyone was dressed exactly alike. 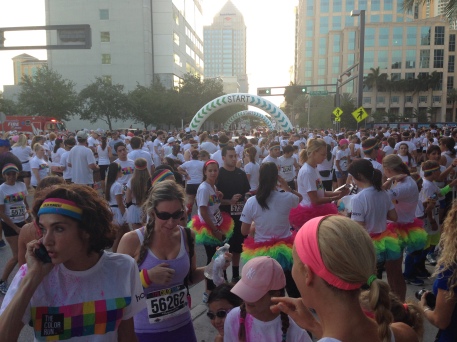 After a very short and slow jog, we decided to walk. Before too long we came to the first color station, yellow, and Emily was so excited she was jumping all over the place. There were huge drums full of the colored powder, and volunteers were grabbing it by the handful and tossing it all over the participants.  They also had some powder in those squeezy ketchup-type bottles you see in diner restaurants, and I held Emily in front of one so she’d really get doused. 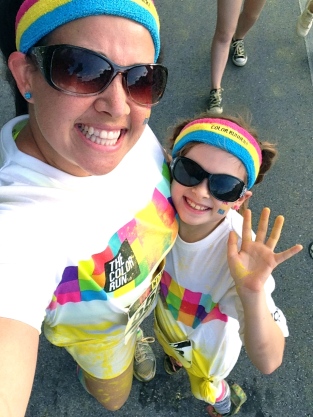 She loved the water stops too, although she hated that people threw their cups on the ground.  I explained that that’s just what people do on these runs and that it’s totally okay, but she was careful to put hers in the trash can every time. 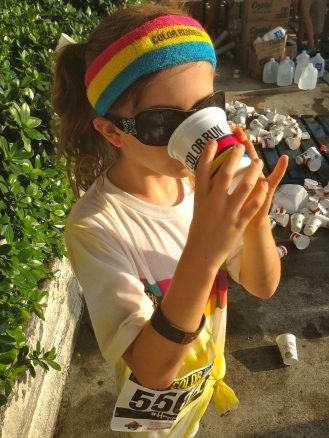 Part of the run took us through a tunnel that goes beneath a main waterway, and she was super excited to get to run through there – although I gotta admit, I kinda was too. 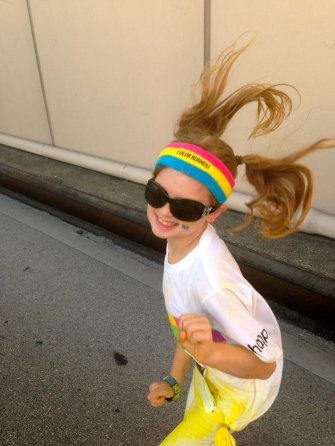 We saw people writing their names on the tiled walls, and decided that we had to leave our mark too.  I know I’ll never see it when I drive through the tunnel, and people behind us may have messed it up, but it will make me smile forever just knowing it was there. 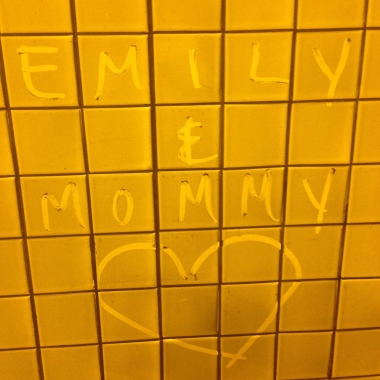 The next station was pink, then purple, then blue.  Sometime around the purple station Emily realized that there were piles of colored powder on the ground (she may have figured it out when I threw some at her), and she went crazy, stopping every 5 steps to rub her hands in it. 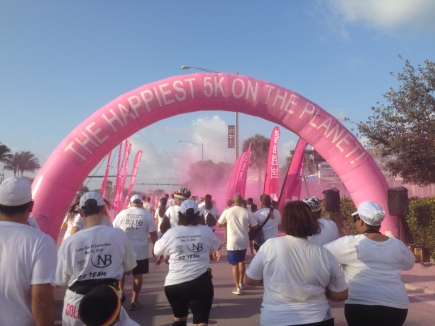 Now that I think about it, that’s the only time she let go of my hand the whole 3.1 miles.  Every so often I’d tell her that she could let go if she wanted, and she’d say, “No, I don’t want to let go.  You’re my mommy and I love you.”  Melt. 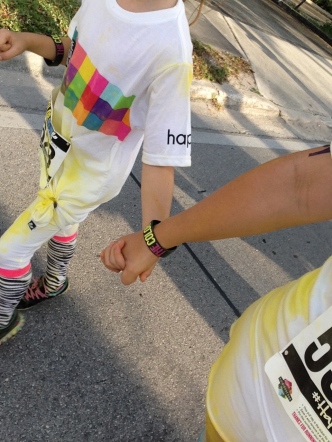 The finish line was pretty uneventful.  We tried to run through it, but there were too many people walking.  Once we finished they gave us each a color packet (they gave us more yellow), and Emily immediately dumped her entire packet on her head. 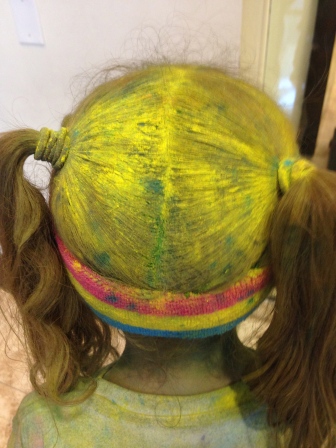 There was a huge stage with tons of people in front, and when the MC counted down everyone would shake their color packets in the air.  Honestly, the only way to describe the feeling in the air was happy.  Everyone was laughing, smiling, and enjoying the foolishness that comes with looking like a Smurf gone wrong.  Thank you Sanne for this awesome photo! 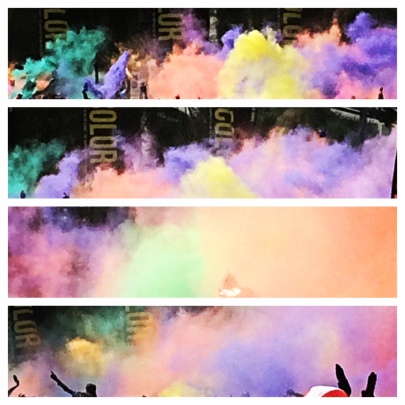 Emily was having more fun than I’ve seen her have in a long time.  Well, maybe not more fun, but a rare kind of fun for her – a carefree, I-don’t-care-what-people-think, impulsive kind of fun.  It’s very unusual for her to get to that state, and it was wonderful.  She was giving high-fives to the volunteers.  She was running into the crowd to dance with strangers.  She was crawling around on the ground looking for packets that had leftover green, aqua, or orange powder. 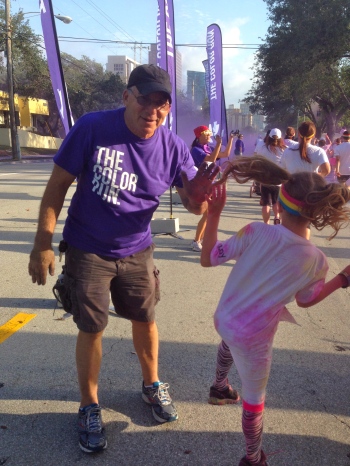 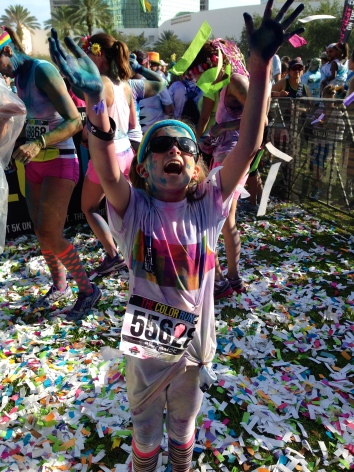 We ran into Sanne again, and her eldest son had obviously enjoyed the event as much as Emily had… see what I mean about looking like a Smurf? 🙂 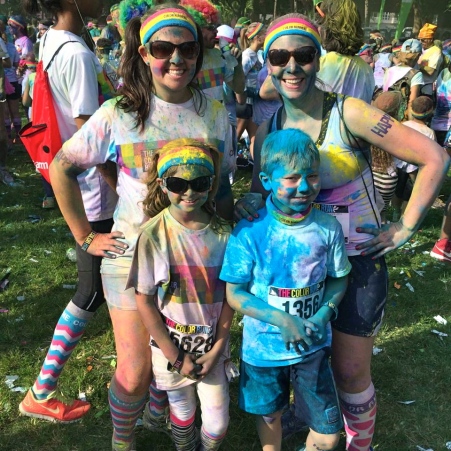 Of course we stopped at Starbucks on the way home, just to squeeze in a little more fun on an already ridiculously fun morning.

It was by far the most memorable walk I’ve ever been on and we can’t wait to do it again next year! Oh – and now she wants to do the mud run with me! AWESOME!!!! 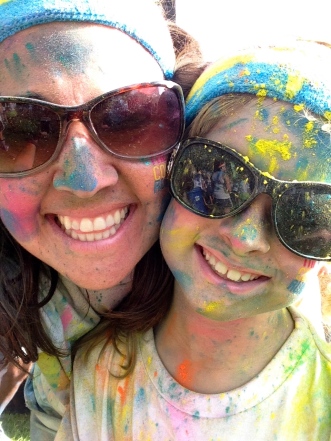 9 thoughts on “Color Us Happy!”