Oh, how I dreamed of this medal. 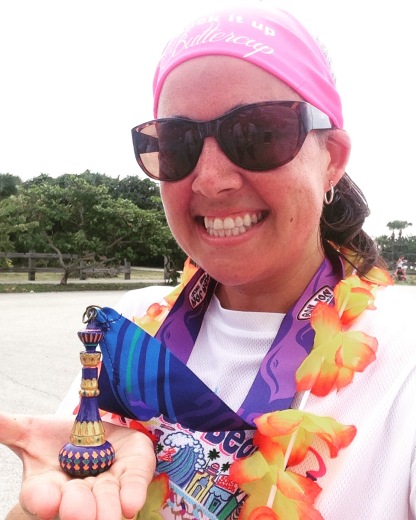 The minute I stumbled across it on Facebook I was scheming and plotting and trying to figure out how on earth I’d manage to train for another half-marathon – in the heat of the summer nonetheless – just to get it. I’d just about given up on the idea when I discovered a super cool way that I could run this event and still get my medal – without running the entire 13.1 miles myself. 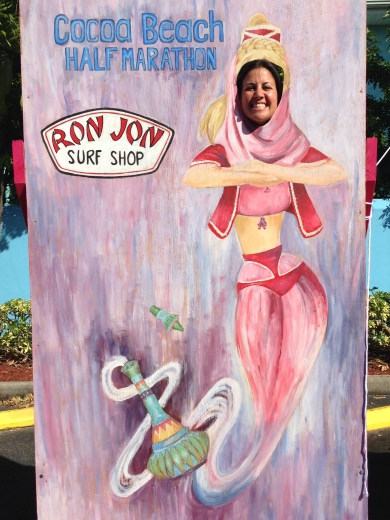 The Cocoa Beach Half Marathon offered a relay option, something I’d never seen at an event before. All you had to do was be ready to run/walk 6.55 miles and find someone who was willing to do the same! I checked to be sure that both runners would receive a medal, and as soon as it was confirmed that they would I sent a message out to my friend Jen, who  had just been telling me that she was looking for a 10K to run (a 10K is 6.2 miles, so this was pretty darn close). Our friend Tina decided to join us, and she had a friend who lived near the event who was also a runner and wanted in on the fun. We were ready to go get those medals! 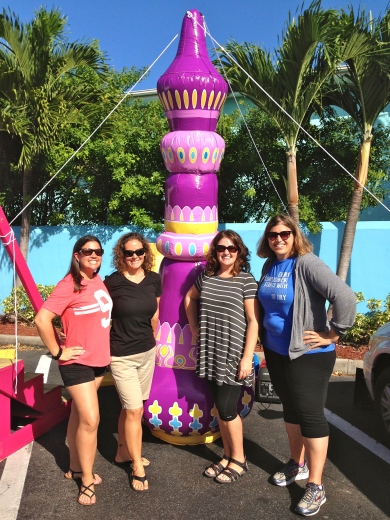 We prepped everything the night before and drove as much of the route as we could to familiarize ourselves with it. Nearly 3 miles of the course was on the beach, so we couldn’t drive that part, but the drive gave us a good sense of some important details, like where the busses would be picking up the runners headed to the starting line, where we would need to do the relay exchange, and where the finish line would be. Of course the race was perfectly planned to end on I Dream of Jeannie Lane. 🙂 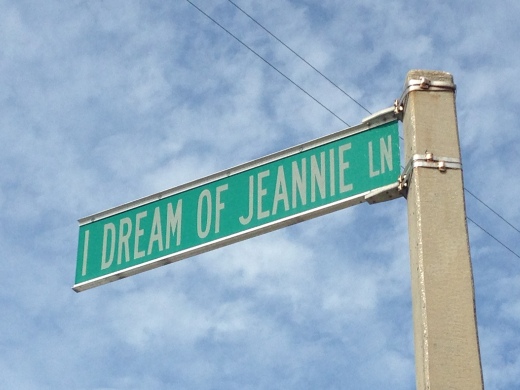 In the morning Jen and I said goodbye to Tina and Jennifer as they got on the bus. Don’t they just have the best smiles? 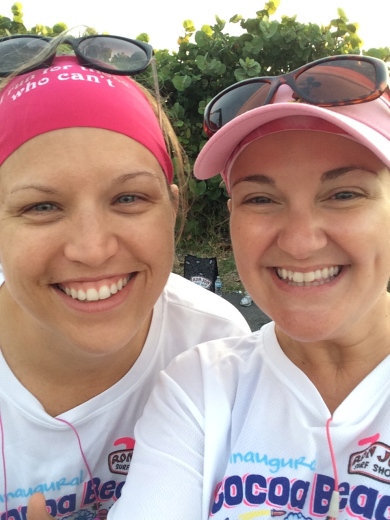 We decided to mix up our partners since Tina and Jennifer run about the same pace and Jen and I run the same pace, that way we’d all have someone to run the course with. I was really eager to run on sand for the first time, so Jen and I took the second leg of the relay, meaning we’d wait for Tina and Jennifer to reach the exchange point at the halfway mark before we could start our leg. 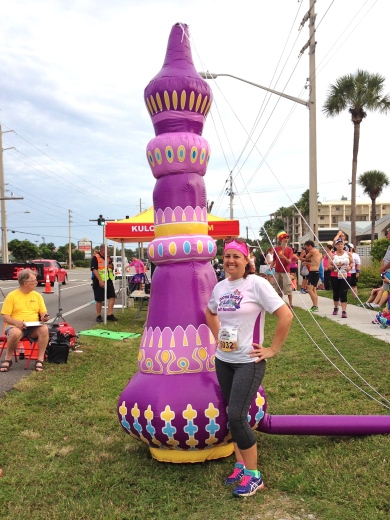 It wasn’t too long before Tina and Jennifer got the the exchange point, and they seemed pretty happy to be done with their half. Jennifer had finished long runs before, but it was Tina’s first official 10K+ distance, so she was extra psyched! 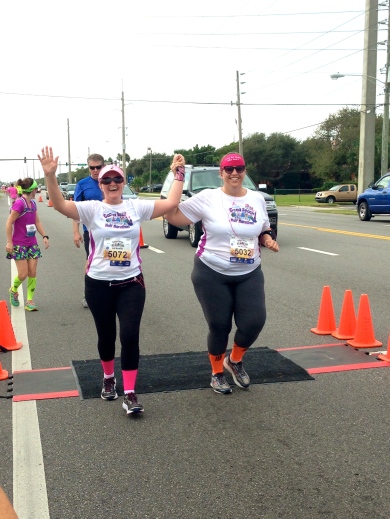 As soon as they crossed the timing pad, Jen and I took off. The first part of our stretch was pretty uneventful, and the route took us down a main road past some shops and hotels and doubled back before turning north again for a bit. But then we were directed to a narrow wooden boardwalk, and after a short jog through the sand we found ourselves running south again right along the shoreline. It was pretty awesome. 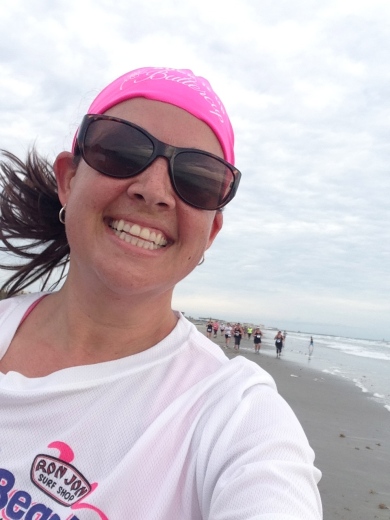 Since Tina and Jennifer were finished and our leg was headed back in their direction, they were able to meet us on the beach to snap a pic. 🙂 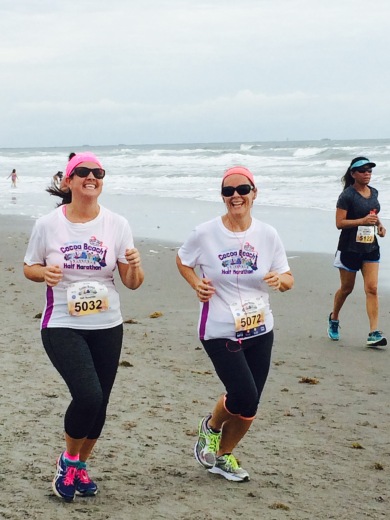 Instead of sandwich board or digital timed mile markers, the event had genie bottle signs along the route with the mile number on them. The signs were held by gals dressed as genies, which was a pretty great way to keep the theme going throughout the course. 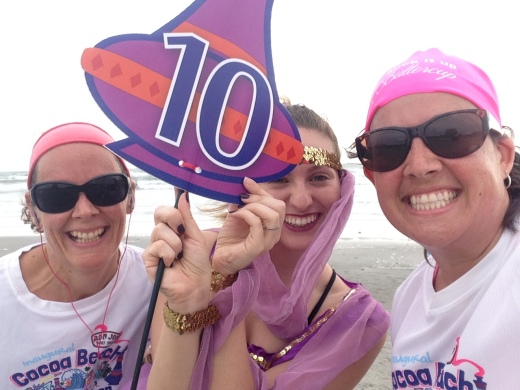 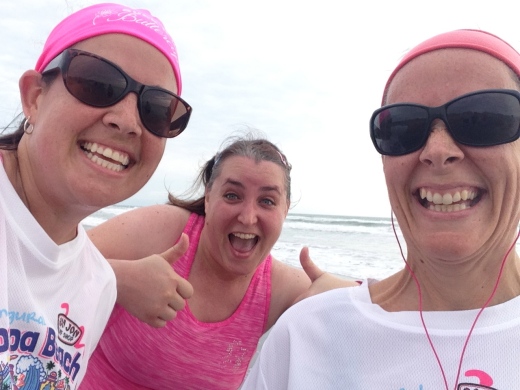 The end of the course took us back up the beach to the same road we started on, then kept on that road until we reached Lori Wilson Park where we crossed a very pink finish line… and received our super heavy and super awesome medals! 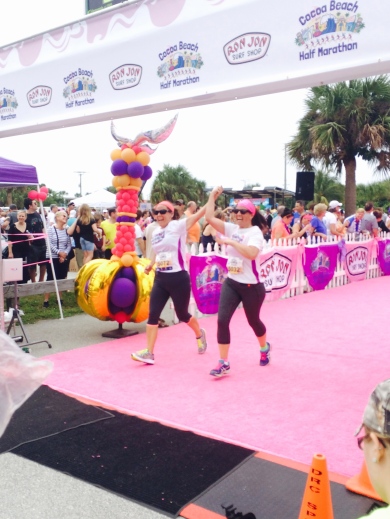 Tina and Jennifer had already received their medals at the exchange point, so once Jen and I had ours we were all officially finished! 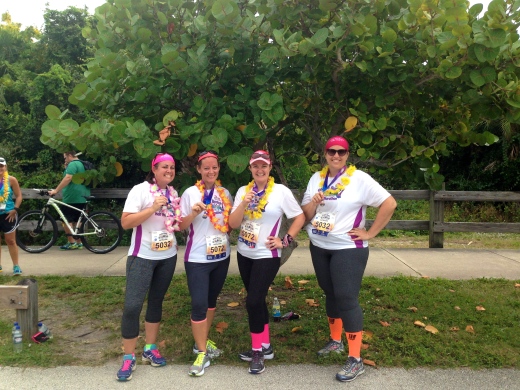 This was the first time Cocoa Beach had held this event, and there were definitely some things they need to work out for future runs. But that won’t stop me from signing up for next year’s race, especially since they plan to hand out a different version of Jeannie’s bottle as a medal! Can’t you just see me with a little collection of genie bottles? I sure can! 😀 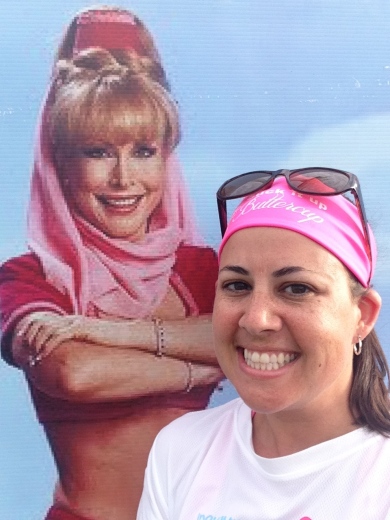 2 thoughts on “I Dream of a Genie Bottle Medal”