*Okay, so technically a Portuguese man o’ war isn’t a jellyfish, but I’ve learned since completing my last half marathon that while they are super common where I live, man o’ war aren’t as well known as I thought – hence the jellyfish reference. 🙂

I found out about the Key West half marathon when I was at the expo for the Ft. Lauderdale 5K I ran last year. A couple of my friends, Tina and Jen, decided that we should all head down together and have a running adventure. It was supposed to be their first 13.1, but unfortunately Tina’s foot was injured and she was unable to join us. (We missed you so much, Tina! ❤ ) Jen and I trained for a few months, then made the 3-hour drive to Key West! 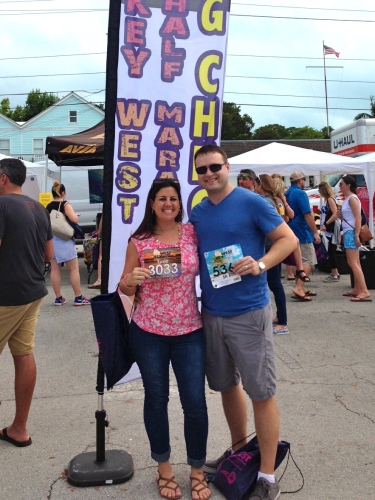 Jay was originally planning to run the half marathon with us, but due to his work travels he wasn’t able to devote much training time to it, so he decided to switch his registration to the 5K. He and I drove down together on the day of the race expo, checked into our hotel, then took the hotel shuttle to the expo to pick up our packets. The event differentiated between the 5K’ers and the 13.1’ers via the bibs – those running the 5K had a bright, tropical sunny day on their bib, while those running the half had a gorgeous Key West sunset on theirs. We also received a gender-specific shirt (which I love), with the tropical sunny image on the front and the sunset on the back. The medals also turned out to be quite different, but I’ll get to that later.

The night before the race Jen, Jay, and I were all watching the weather with heavy hearts, as we were predicted to have nonstop thunderstorms for the entire day of the race. Sure enough, before turning into bed that night we could hear the wind picking up and eventually howling, and the rain starting to pour down. We woke early the next morning and checked our email, finding that now there was a tornado threat and that the start time had been pushed back an hour. We kept watch for more updates, but when there weren’t any we grabbed a cab and headed to the start line.

The weather was super gloomy. The skies were dark, the wind was strong, and it was raining. Nearly everyone had ponchos or garbage bags on, but nearly everyone was laughing at how crazy the situation was. Jen and I found the pace time we thought we could meet and stood with that group, and when the anthem was sung and 8a came, we were off!

The route was amazing. We ran through the streets of Key West’s historic Old Town, past shops and restaurants and the famous “Mile 0” road sign. We ran past the Southernmost Point in the U.S. We ran through some of the neighborhoods. There were huge puddles everywhere, but right about mile 4 we looked at the sky and noticed that it was turning blue and the sun was peeking through. You gotta love Key West!

Just past mile 3 the course opened up and we found ourselves running alongside the ocean. We ran on a wide sidewalk, which had a wall between us and the ocean – there was no shoreline. The storm the night before had blown a blanket of seaweed over the sidewalk… and also quite a few of the aforementioned man o’ war, which speckled the dark green seaweed with their vivid blue coloring. Peering over the wall, I was able to spot a few more of these beautiful (yet painful) creatures bobbling along the surface of the water. It was my favorite part of the entire course. 🙂

The wind was at our back until the turnaround point at about mile 6, and then we were running into a headwind so strong it almost forced us into a walk. There were a few times I could feel it blowing my legs around as they were in the air mid-step. It was pretty crazy. The original course had us running along one of the piers, but the winds were so strong it was unsafe and they rerouted the course. We also opted to not use any port-o-potties in such windy conditions, which proved to be wise thinking: 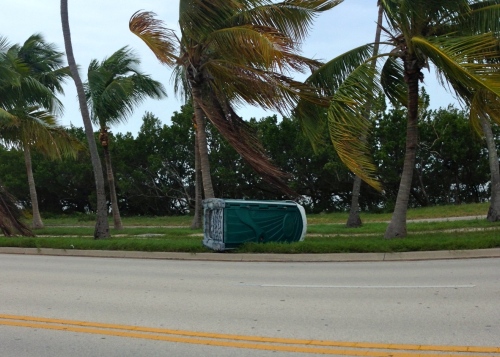 The rest of the run was pretty uneventful, although my knee started to lock up around mile 11 and by mile 12 it was better but my left hip started locking up. I think it was mainly due to the strong winds, since I’d run that far before without injury but never in winds like that. Some things you just can’t train for! Jen and I crossed the finish line about 2:43 later, which is a bit longer than we were aiming for, but again – headwinds.

Now, about those medals. The medal for the half marathon is pretty awesome. It’s a double-sided removable wine stopper, with a lighthouse on one side and an iconic conch shell on the other, in beautiful full-color. The medal for the 5K was, unfortunately, much less impressive. Jay wasn’t able to find a volunteer that had any when he finished his event, but ended up finding one still in the package in a box discarded in the trash. It’s pretty underwhelming as far as 5K medals go, but it makes for a funny story. 😀 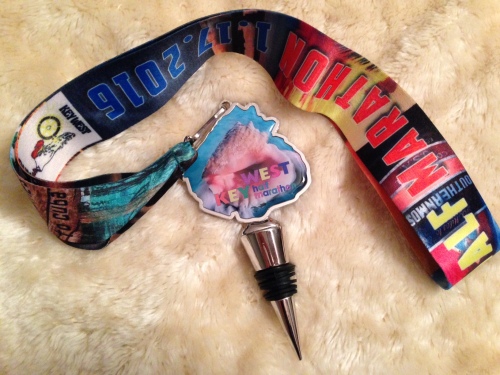 Impressive medal or not though, this guy continues to make me proud. About a mile into his 5K he developed a bad case of shin splints in his right leg. He ended up needing to walk a bit more than he’d planned, and as a result his time was considerably worse than when he ran this 5K a few months prior. I honestly don’t care, because he stuck to his goal: to finish. He was in a bit of pain the rest of the day (and pretty much decided that running isn’t his thing), but he did it. ❤

Would I do this run again? Probably not. It was beautiful and fun and I love the medal and the man o’ war were a nice touch, but it was a bit of a drive and a bit unnerving that there had even been a slight possibility the weather could have ruined everything. Of course, it was Key West, and once the run was over this hunky hubby of mine and I hit the town for some post-run fun… so maybe I would give it another go after all! 😉

PS – I have a tradition of getting a charm for my Pandora bracelet after completing a half marathon. Key West is known for their free-roaming chickens and roosters – seriously, they walk everywhere and scare the pee out of you when they start crowing from behind a bush. So it seemed perfectly fitting that the charm that best commemorated this race would be a rooster. Isn’t he cute?

PSS – That beautiful photo at the beginning of this post was taken by Jen’s mom, Lynne.